from flying to gliding:  the history of prince albert nordic ski club 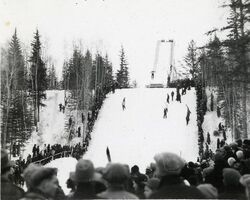 The ski club has attempted to summarize a bit of the history behind our Club.
​
The summary compiled in 2021 by Theresa Nimegeers, Dulcie Charles and Joan Jeffery.  Enjoy reading about our history; let us know if we’ve missed anything (as no doubt we have), or if you have any interesting anecdotes or facts to add.
​
​
1930’s and 1940’s and 1950’s – the early years

The Prince Albert Ski Club was formed in 1932, making it one of the oldest established clubs in Saskatchewan.  It included three disciplines of skiing: ski jumping, alpine or downhill and nordic or cross-country. Fred Russell and Jack Ramsey are remembered as being the principal organizers. The initial impetus behind the club was ski jumping.  The first jump was a rickety scaffold of poles built on the north side of the Little Red River.  Several years later a larger one was built.  Eighty foot logs from Christopher Lake were brought to the site and erected on the south side of the Little Red River.  Members of the club completed the wood work to make a sound, modern jump.  Jumping tournaments were held every winter.  The jump was tall enough to be seen from the city.

​The club has been associated with Saskatchewan Amateur Ski Association (SASA) and the Canadian Ski Association since the early 1940’s and has hosted jumping, cross country and downhill meets for the whole of the prairie provinces.

In February of 1939, the first provincial championship sanctioned by the SASA drew 3,000 spectators to PA’s venue. There would be racing in the morning and jumping in the afternoon. The championship included a 10km cross-country race for men and a  four-km course for women.
​In 1942, the club hosted the provincial championships again and the race featured an 11 kilometer course that passed through the stadium twice to the roar of cheering spectators that numbered in the 2000’s. The race loop brought more visibility to the sport of cross-country skiing.  In 1956, club member Ralph Colevin, became the Canadian National Cross-country Ski Champion, racing in Thunder Bay.

After WW II, Frank Ballantyne is credited with rejuvenating the ski club.

Prior to 1950, a rope tow and a log clubhouse were added.  A caretaker was hired to come out early on weekends and Wednesday evenings to start a fire and have the clubhouse warmed up for the members.

Cross-country consisted of a trail around the lip of the plains area that had been used, since at least the early 1950’s:  the days when you had a clip-down cable harness that you could use for both downhill and cross-country.

Skiers would bushwack the trails to create the correct groove so that both ski and ski boot fit in the finished trail.

Christina Woodrow was the secretary for 22 tireless years, spent countless hours holding meetings at her home, selling memberships, writing up minutes and doing the books as treasurer too.

By 1968, membership had risen to 300 up from 260 the previous year.  At that time, the most popular type of skiing in the club was downhill.  The ski jump tower was taken down as it was in a state of disrepair. Cross country skiers were still few in number. 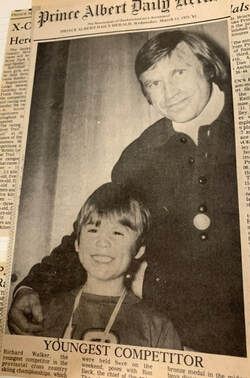 At the same time, along came Ron and Carol Beck, Louis Rishchynski and Keith Thorsteinson, as well as a new generation of cross-country ski-trail packing equipment (a snowmobile and a wooden track setter).

Ron and the others created our fabulous network of trails. After the initial ski trail around the River, other trails were later developed:   the Tower, Kristi, West and North trails. The 20km. Ravine trail was considered a wilderness trail. Ron and Louis packed and set the classic tracks. They were also responsible for putting together a competitive race team.
Carol, herself, competed in several European and North American races. 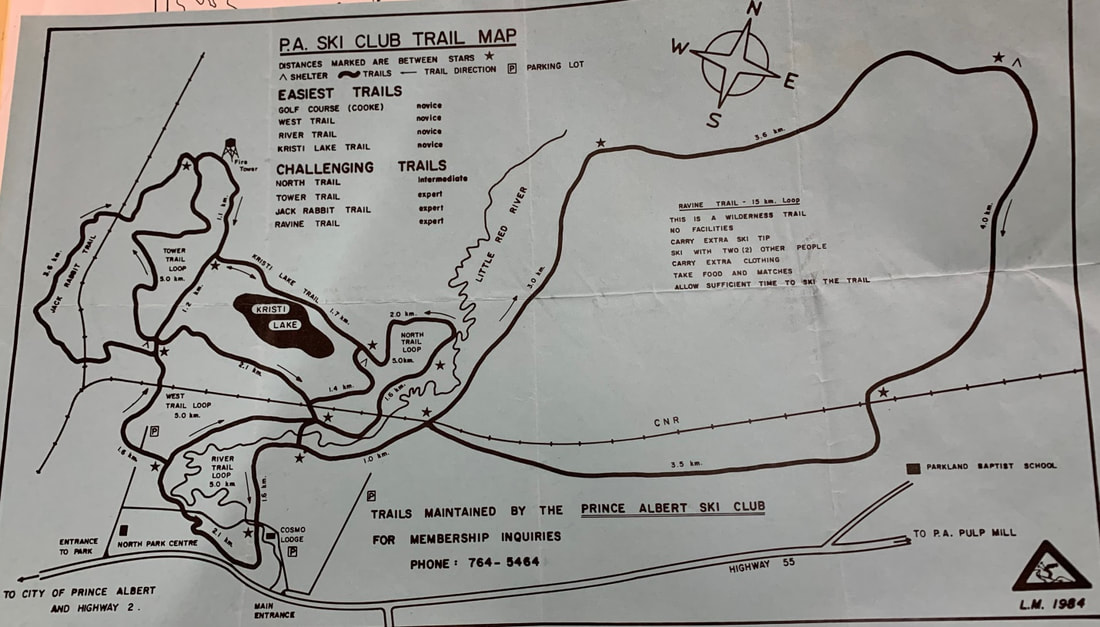 One of the biggest support programs for the sport of cross-country skiing came out of
the JackRabbit ski league which grew out of a CSA pilot project in Winnipeg in 1976.  The purpose was to teach children the fundamentals and proper techniques in a relaxed, fun atmosphere.  This program was promoted nationally in 1980 and introduced to the club by locals, Gillian and Murray Little. In 1986, they received a provincial Volunteer Award for their efforts and dedication to the program.  At the time the club had 66 participants in their program.

Racing was also on the agenda. In the early 80’s, P.A. hosted the Western Canadian Championships with SK, AB, BC and NWT athletes.
Almost 30 years had passed before the club saw another national medal.  In 1984, at Jr. Nationals in Kamloops, Rick Walker won both a Silver and a Bronze medal in the 10km and 5km, respectively.  After his showing at Jr. National he was invited to train with the Olympic Development Team for the 1992 0lympics in Albertville, France but decided on medical school instead.
In 1987, Cook Municipal golf course was the scene of the CSA National level Canada Cup Series. Since the races were held at night, the course was lit by oil lanterns and made a lovely spectacle. This event included for the first time, both classic and freestyle (skate) technique. The new technique of freestyle was gaining a lot of interest.

In 1992, the Club introduced a Challenge program for experienced skiers ages 13-19 who wanted to improve their daily long distance endurance in the 30 to 60 km range. The combined alpine and cross country club still boasted 500 members.

In 1993 the River Trail Lighting project was completed.  The project encompassed:
A loppet organized by the nordic skiers in conjunction with the PA Winter Festival ran for a couple of years and started on the river at the boat launch.  The course headed down the river, behind the island, under the Highway bridge, into Little Red River park and onto the ski trails. 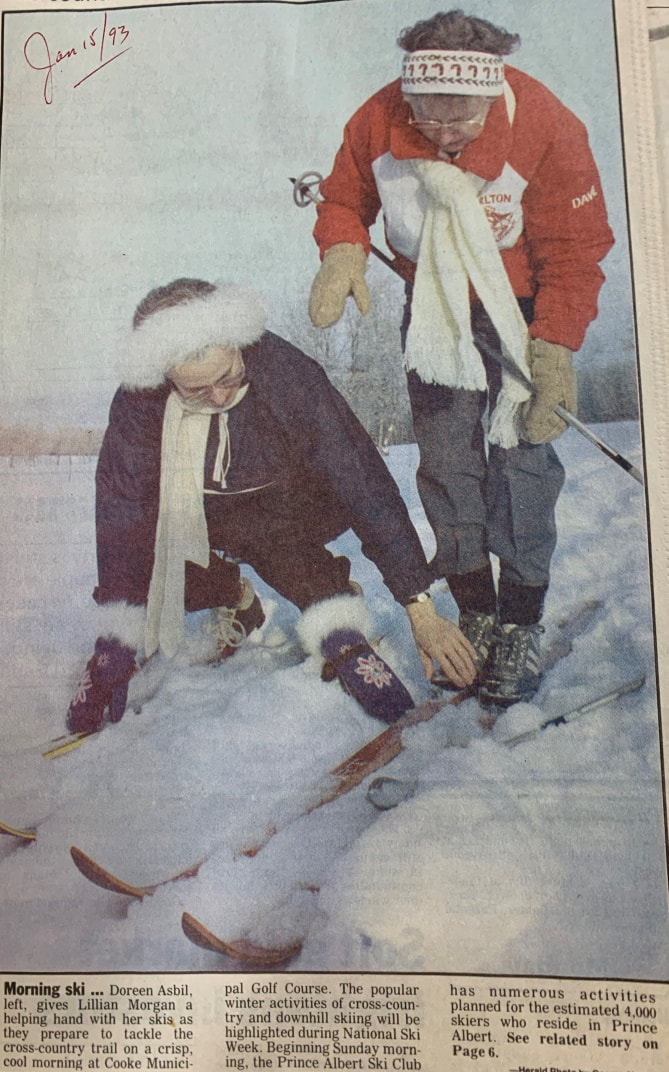 2000 and Beyond
​
Early in the 2000’s, the alpine and nordic disciplines divided into separate clubs. The cross country portion maintained the original name, Prince Albert Ski Club, and became incorporated as a separate entity.
During this time a big emphasis was put on obtaining state of the art grooming equipment and also the construction of a new equipment storage shed.
The Jackrabbit program that had lapsed for several years blossomed again in 2004 and attracted 45 participants. It has continued to expand and pull in additional volunteer leaders to this day.
A school ski program was also offered, with several local schools involved.  The season culminated in a School Ski Fest at Little Red, with 150 young skiers.  The day consisted of a loppet, dash for cash and fun relays. Most schools in Prince Albert area have cross-country skis and incorporate them into the physical education program.
In 2014, the Sask Winter Games were hosted at the Cooke Municipal ski trails. A lot of work was put into this venue to make it acceptable for races.
Collette Bourgonje, who grew up in Porcupine Plain, SK won 6 Paralympic medals in sit-skiing, spanning a Paralympic career of 22 years which included summer Para-Olympics.  Brittany Hudak, club member and 2 time para- Olympian, won a Bronze medal at Pyeongchang Winter Para-Olympics in 2018.
Two high level competitions were hosted by the club at Little Red in 2019. These were a very successful Sask Cup Classic race for all ages with 99 competitors, followed by the Canada Winter Games Trails where the Saskatchewan team was decided.

In recent years, a re-energized club has brought many changes and improvements to enhance the skiing experience for all skiers. The club now functions under a newly registered name, The Prince Albert Nordic Ski Club.  This became official in 2020 and reflects the nature of the club more clearly.
The club has evolved to become a “full service” club. This includes: a healthy Jackrabbit program, Track attack program (for more competitive older youth), a para-nordic training group, adult ski lessons, sanctioned and recreational events (races and loppets), and qualified officials, coaches and instructors and a Biathlon component.
Trail development has been a major focus with the addition of new skating trails, widening and levelling of the River Trail, improved classic trails and new signage. The city of Prince Albert upgraded the lit River trail with new LED lighting.
The club also has worked with the “walkers” and to develop and groom trails for their use.  New signage for the walkers has also been received well.  The provision of the Multi-Purpose Trail has also been a well-used feature.

Today the club maintains 35 km of groomed classic ski trails and 13km. of skate trails at Little Red River park. 5km of skate and classic trails are also groomed at Cooke Municipal Golf Course.  The club has grown to over 660 members in a banner year for the sport.  The Club hopes that those who have discovered or rediscovered this wonderful sport will continue their interest in the years to come.